skip to main | skip to sidebar

In between rainy days, we have had some beautiful fall color. Sunny days are the best days to enjoy them, but even on the gray-cloudy-raining forever days the colors are gorgeous. 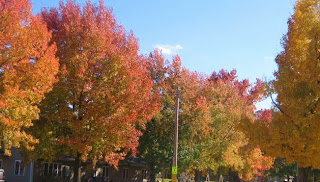 I had been worried we would only see shades of brown... 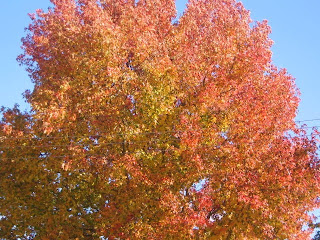 so thank you Mother Nature for the wonderful display! 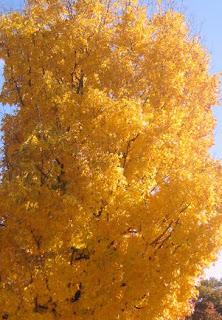 In between the rains, the farmers have been struggling to harvest their crops. Soybeans are taking precedence as they are starting to mold in the fields. And that is not a good thing. I have a feeling that a lot of crops will be taken out after the ground freezes and they can get in there with the heavy machinery. Harvest in Illinois is at least a month behind, and that was before this last 2" fell. This coming week, while we are supposed to have a moderation in the temperatures, we are forecast to have 3 more days of rain! 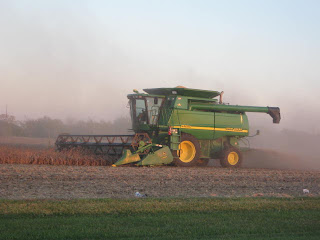 My gardens have been suffering from neglect. It seems I am a fair weather gardener wanting warmer temps and dry conditions. Oh, and a few less of those darn biting Asian beetles! 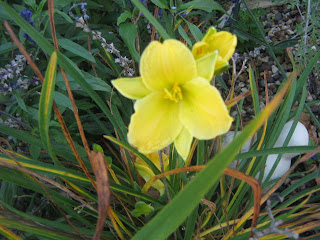 So imagine my surprise, today, when I found this Stella blooming as if it were spring. 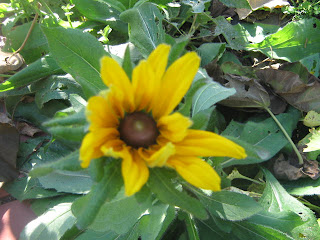 And this Fabuosa Daisy just opening. 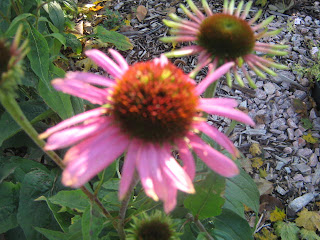 Most of the cone flowers are long gone with the birds enjoying the seed heads. A few seeds must have fallen to the ground and found time enough to grow and bloom. All of the late bloomers brightened my day. 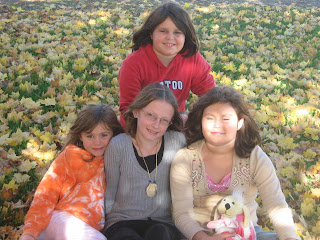 As did the grands this weekend. A lot of time was spent outside playing in the leaves. 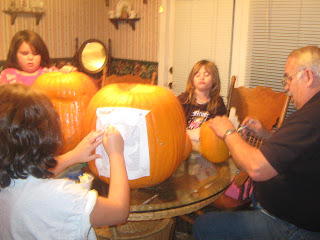 I promised you a photo of the pumpkins they picked after they were carved. Here Papa and the girls are hard at work making scary designs. The most difficult part was getting all the seeds out! But we saved seed from each pumpkin with promises of planting them next year. 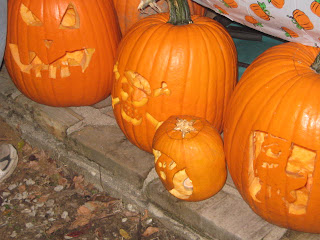 Not a great picture, but the girls were happy with the results and they looked great after dark all lit up.
**Update on hubby...I can tell each weekend when he comes home how much better he is feeling. He says he didn't realize how bad he did feel. He has more energy and is doing very well with his walking and diet-even on the road. I am proud of his determination and accomplishments! And thank you all for your concern and caring.
I hope you are all enjoying the last days of this year's gardening and hope you have a great Halloween. :)
Mish Mash Monday was originally Monica from Garden Faerie's Musings.
Posted by beckie at 7:56 PM 36 comments:

October has always been a favorite month for me. I chose to get married in October when the temps were cooler and the sun cast a soft warm glow on all below. As much as I like spring and the soft pastel colors, autumnal colors give me a warm and cosy feeling. The golden yellows, brilliant oranges and the glowing hues of maroons on the trees signal a time of rest is coming. 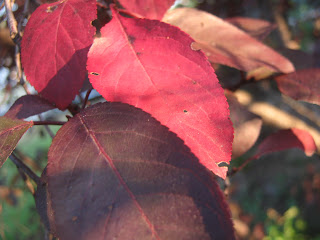 And I, for one, am more than ready for a rest-from the garden and from the hectic pace of summer. Hooray for cold rainy, snowy days where I can sit by the fireplace and drink hot chocolate, read gardening blogs and out my feet up. 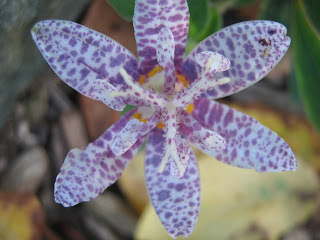 The garden is winding down, but a few flowers are making their first appearance. This toad lily, while very small yet, is a glorious new addition to the garden this year. It is surprising how the blooms start at the top and open down the stem at each junction between the stem and leaves. 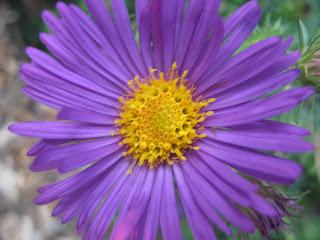 The native Aster that I bought early this spring is beautiful with it's purple petals and golden center and more than lived up to expectations. 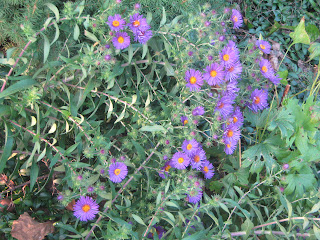 Next year I will have to remember to stake it as it now looks more like a ground cover. :) 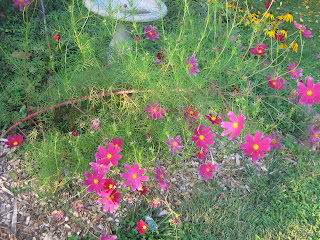 This cosmos must have taken a cue from the aster-it is also happily blooming on the ground. More staking is needed! Actually, both these plants and a few others suffered wind damage early in the summer and no amount of coaxing could make them stand tall again. 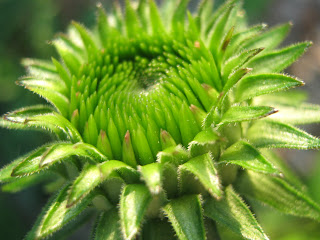 While most plants in the garden are experiencing their last hurrahs, this transplanted cone flower is just beginning to bud. I love the light in this photo. 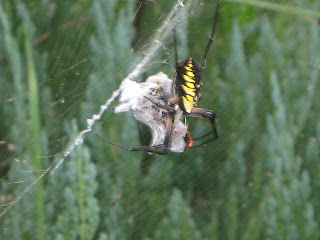 Another sure sign of fall in the garden is the spider webs. At least in my garden they can be found in abundance. I do NOT like spiders! But having said that, as long as they stay outside and kill bad bugs, I will leave them alone. I have put them on warning though. Come into the house and I will not be held responsible for my actions! 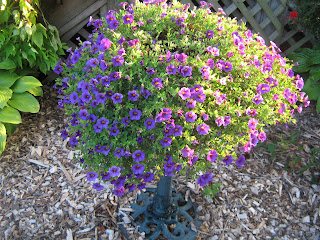 Some of the containers are still looking great. These purple Calibrachoa have been one of my favorite containers this year. I will be planting more of these next year-they were very low maintenance and only required a little water now and then. 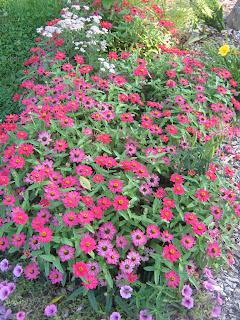 Another sure plant for next year are these cherry Profusion Zinnias. I had 5 plants left after doing my containers and stuck these in the ground next to the raised landscaping timbers. With purple wave petunias on either end, this has been a favorite spot in the garden. 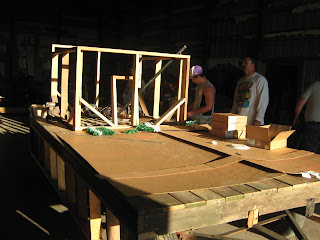 With the arrival of fall, there are certain rituals that must be observed. One is making floats for the Homecoming Parade before the big football game. Our 2nd granddaughter is a sophomore this year and asked if we would help on one of the nights they were putting together their class float. 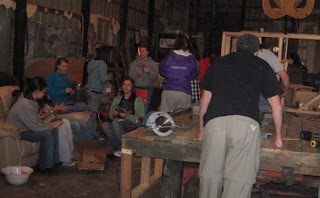 I won't admit here how many years it has been since I last worked on a float, but was pleasantly surprised at the enthusiasm and work ethic of the many who showed up to help. 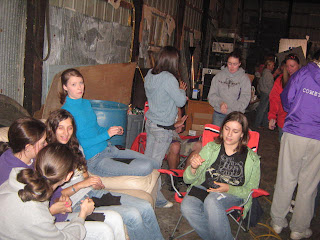 Parents and the kids were all willing to do what ever to get this float built in a short 4 nights. Here, the girls are rolling squares of tissue paper to be glued to cardboard signs. 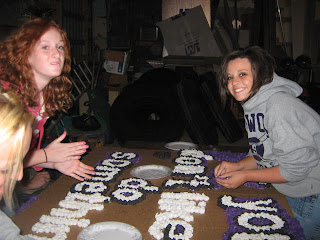 This is where I spent most of my night-gluing the balls on. I was so pleased that our granddaughter thought us cool enough to meet and work with her friends. Their float came in 2nd overall and first in originality. 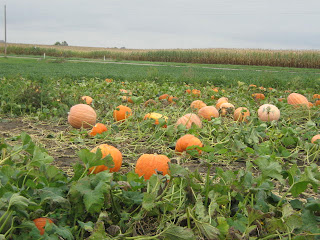 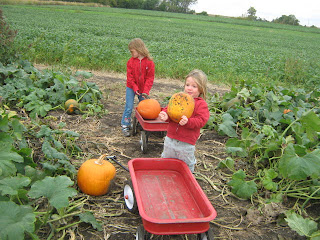 This weekend we loaded up 5 of the grandgirls and on a cold, windy, rainy afternoon made our trip to the local patch. We let them pick out their own and load them into their wagons-for the most part they even pulled their own wagons. 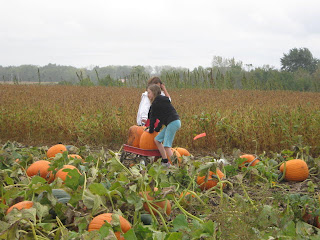 The 2 older ones picked pumpkins weighing 46 and 51 pounds! 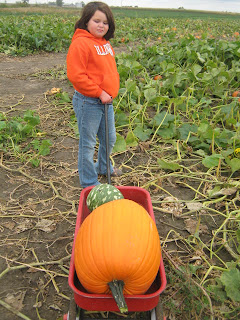 This one weighed in at 43 pounds. She also pick a swan necked gourd. 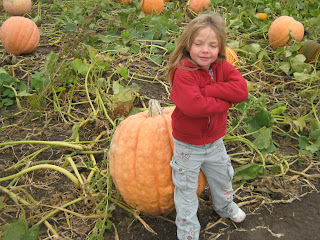 The youngest wanted this one, but was content to just have her picture taken beside it. 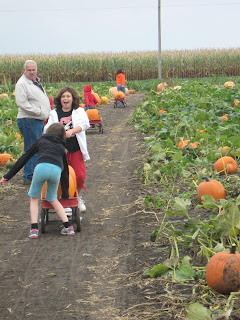 Papa supervised the wagon train back to the barn so we could pay for our prized pumpkins. They are being used as decorations around our gardens now, but in a couple of weeks we will be doing some carvings. Be warned-photos of their creations will appear on this blog!
After 3 weeks of having hubby at home and learning to deal with his just diagnosed diabetes, he is back to work and the house is mine again. :) He had a Dr. appointment on the first day of his vacation-we were pretty sure of the outcome and that is why he decided to take some time off. We have both been learning how to eat and cook to satisfy his dietary needs. He has done really well and I am very proud of him. He has been walking each evening and plans to keep that up even though with his job of driving a truck will make that a challenge. Also a challenge will be eating on the road and eating on time. I am fairly confident that with the food we packed and the menus I sent he will be able to do it. He is just stubborn( determined) enough to make this work. :)
Have a great fall gardening week!
Posted by beckie at 8:40 PM 36 comments: 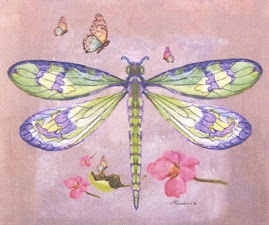 Deep in the sun-searched growths the dragonfly Hangs like a blue thread loosened from the sky. ~Dante Gabriel Rossetti

beckie
central (the prairie lands), Illinois, United States
I am a grandma of 7 beautiful girls,and a wife of 42 years to a wonderful husband. I enjoy flowers and plants, nature, reading, cooking, crafting, and of course spending time with family and friends! email me at: reifsteck.rebecca3@gmail.com